The Environment, Public Transport, and my 'Green' policies.

One of the really positive things about holding General Election 2020 on a Saturday is it should lead to a bigger turnout on February 8, particularly among young voters and college students. As a father with teenage children, it’s really positive to see how engaged young people are with politics and particularly global issues such as climate change. Not everyone can be as heroically committed as Greta Thunberg , or Saoirse Exton, the Limerick teenager who has led the Fridays For Future campaign here. However, most young people are informed enough to teach my generation and older what needs to be done to address climate change.

The Green Party doesn’t hold a monopoly of concern about the environment. Prior to becoming Mayor, during my term, and since, I have been highly vocal on banning incineration in Limerick, and on introducing new and better air quality monitors in Limerick, especially around schools, where the emissions spike to dangerous levels at exactly the times when parents are arriving in their cars to drop off and collect their children.

I have been highly critical of Limerick Council for not taking a huge opportunity to introduce more pedestrianisation in the city centre, and for its failure to put in place an adequate cycling infrastructure. As Cathaoirleach of Limerick Metropolitan Council. I invited a number of groups including Liveable Limerick, Limerick Cycling Group, Limerick Cycle Bus, Limerick Georgian Society, Step Forward Disability group and Limerick City Business Forum to come in and make presentations. Their excellent presentations reflected the ambition and the vision of the wider public. Unfortunately the council, led by Fine Gael, shot down their plans.

I am on record for at least two years criticising our public transport system in Limerick, particularly our bus service. I haven’t just taken to social media to highlight what’s wrong with our city. I have set out policy proposals to improve our public transport and get more cars off the road, and more people walking and cycling. I outline some of those proposals below. 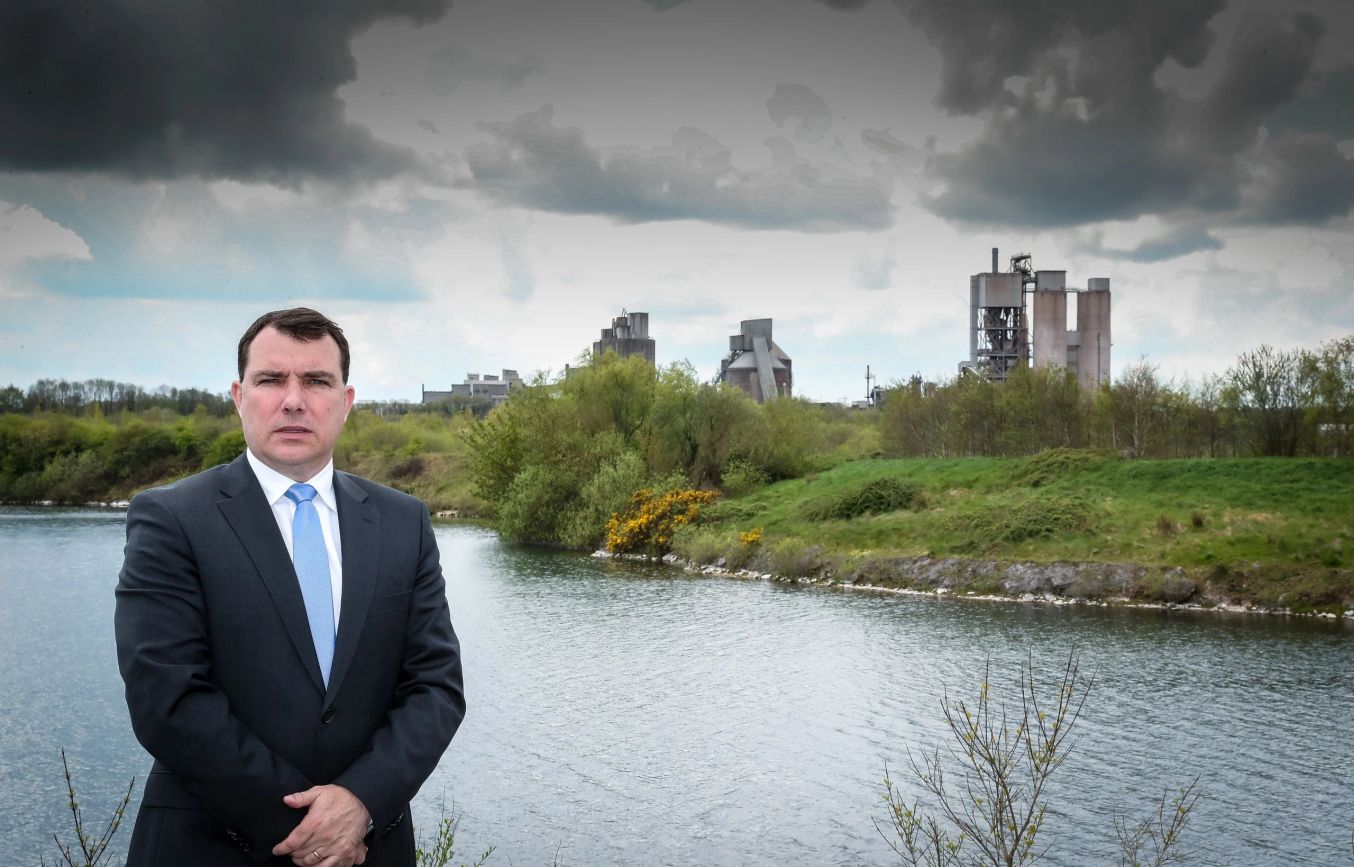 Fianna Fáil General Election candidate, Cllr James Collins, opposite the Irish Cement Plan in Mungret. Cllr Collins has called for a ban on incineration in Limerick.

Health, housing, childcare, law & order, pensions, and the squandering of public finances, are all key issues on the doorsteps in this election. But how Ireland tackles a global issue such as climate change at a local or national level is as important as all of these issues. It’s probably the biggest issue of our time  - the clock is ticking and we have no choice but to change how we live. That change will be driven incrementally by government policy, by education, and by behaviour.

There’s a field of study called behavioural economics, which has thrown up some interesting findings. For example, it is statistically proven in Ireland and across the world, that a road sign flashing a smiley face to passing motorists driving under the speed limit, is much more effective than a flashing red warning that you are driving over the limit. Both work to reduce speed, but drivers are proven to respond better to the positive reinforcement of a smiley sign. The way to positively change our behaviour locally in order to bring about global improvements in climate change, is to reward people for meeting the environmental targets set by government policy, and the behaviour change we want to bring about in society through our educational programmes.

For example, carbon taxes have to be incrementally increased to force behavioural change. There’s no escaping that, but I, and my party Fianna Fáil, propose ring-fencing monies raised from carbon taxes for retrofitting of homes, another incremental measure towards bigger change. We have to add positive implications to any punitive policy changes. I believe a lot of the required change has to be driven through the local authorities. Take cycling, for example. There are obviously massive infrastructural changes and policy changes required in Limerick to make it safe for children to cycle to school. But we also have a fabulous example of what can be done in Limerick - and that’s provided by the Limerick School Cycle Bus - a group of parents and children cycling to school together from the Northside of Limerick. Fianna Fáil is committed to investing more money into this area. Fine Gael, however, has actually cut funding for cycling infrastructure by 57% since 2015. One in ten commuters now spend more than an hour getting to work in their cars, an increase of 31 percent, since Fine Gael came to power nine years ago. 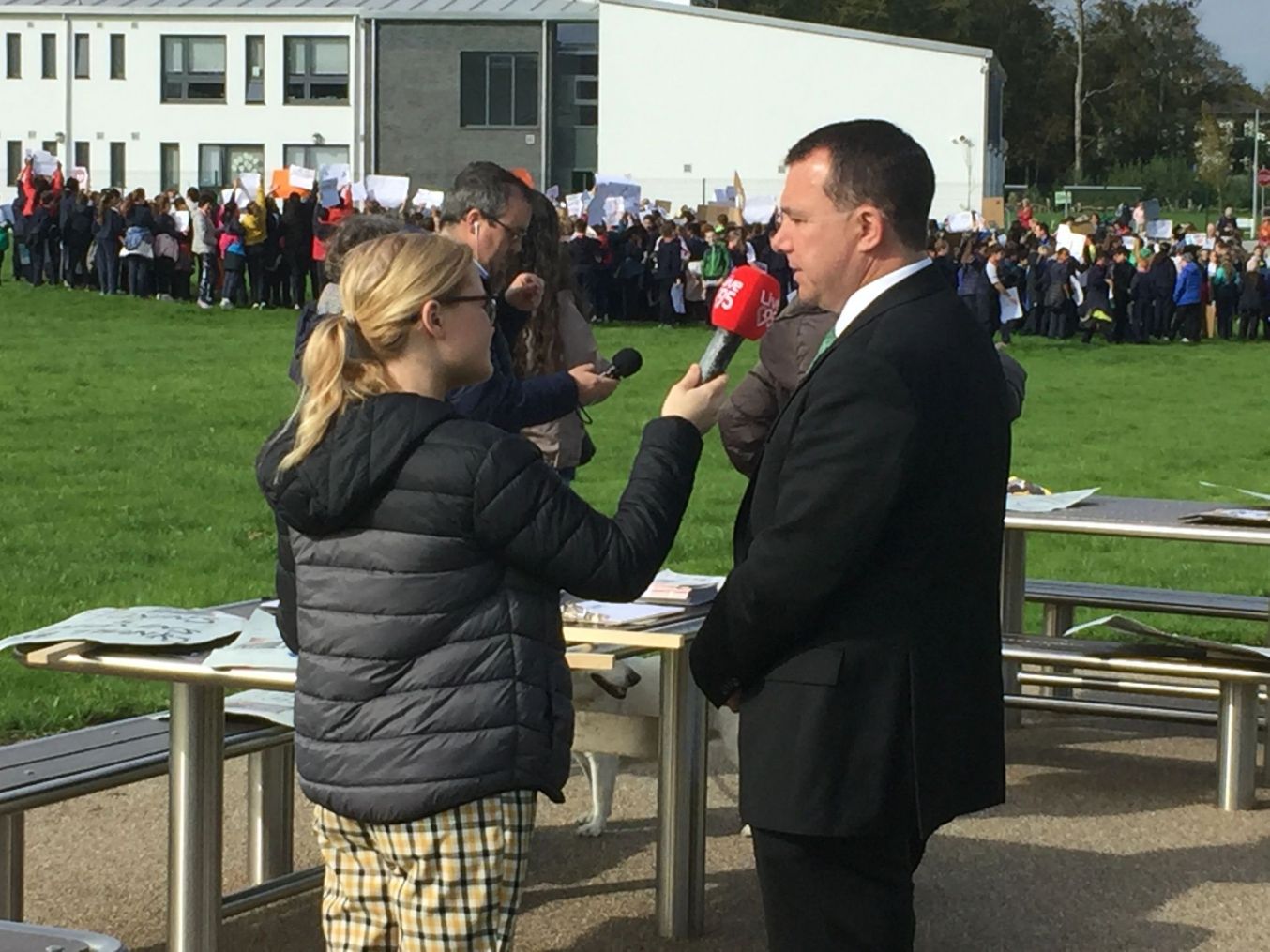 The big frustration I hear is how long all this takes. I think, however, that the local authority has to listen, produce plans, and be prepared to adjust them to accommodate the views of groups like Limerick Cycle bus. I was a key driver behind the project to build Mungret Park and to put in three new schools, expanded sports clubs, new roads, bus and cycle routes. We have produced plans, and listened to the views of cycling groups, and now we are adjusting those routes accordingly. That process of consultation and listening is slow, but completely necessary so that we get it right. If we can get it right in a huge suburban area covering more than 10,000 people in Dooradoyle, Raheen, and Mungret, then we can use that as a template for how we do things across the city.

If you talk to parents in Caherdavin, Castletroy, Dooradoyle or Raheen they will tell you that they often spend more than one hour a day in their car on school runs. Providing a bus, cycling or walking alternative will get more cars off the road and help reduce our carbon emissions.

My campaign slogan is A Limerick That Works For You. That means having public services that work, a public transport system that works. I called for a radical re-imagining of our public transport in LImerick more than 18 months ago. We are waiting far too long for the Limerick-Shannon Metropolitan Area Transport plan (LSMAT). We need a combination of BusConnects, Quality Bus corridors and orbital bus routes, planned in conjunction with park and ride facilities at the Dock Road, Coonagh Road, Ennis Road, Dublin Road, Patrickswell and the TIpperary Road. We need high-frequency bus services (every ten minutes) serving UL, the National Technology Park and Limerick City, with new bus routes linking  Raheen Industrial Estate, Mungret and Casteltroy. And, of course, we need properly designed and integrated cycle routes. As a member of the UL governing authority, I sit on the transport committee. We have been tasked with finding practical solutions in connecting the Castletroy and new city centre UL campus. 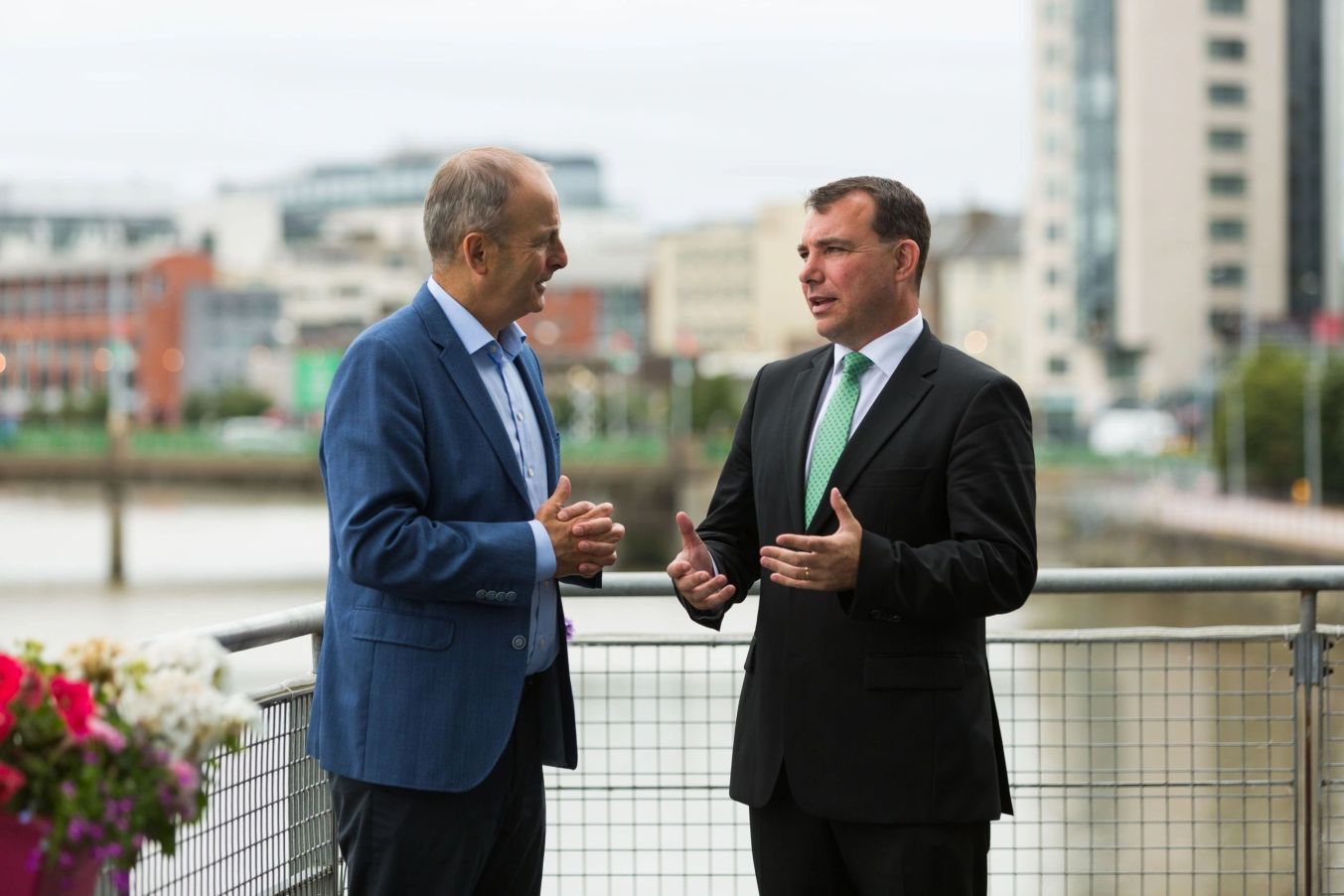 I have been a vocal proponent of the need for balanced regional growth, and for LImerick to have more control over its own finances and public services, particularly in transport. Improving public transport is a top priority of mine. That’s why - unlike the Green Party, which is against the M20 upgrade - I and Fianna Fáil are fully committed to providing full connectivity between Cork and Limerick via the M20. This isn’t about adding more cars on the road, it is about making it safer and easier for people to commute between Ireland’s second and third cities. You use the motorway connection to bring people to park and ride facilities outside the two cities, and have a proper inner city public transport system, which lets people in the suburbs get to school, work, or out for socialising in a revived inner city, without having to do so by car. Full connectivity via the M20 will also make Limerick a more attractive location for multinational and indigenous business growth, and a key tourism destination along the Wild Atlantic Way.

I would also like to see the Limerick-Shannon Metropolitan Area Transport plan utilise the disused rail network in Limerick for a light railway system. Cork is getting funding for a light railway connection from Ballincollig to Carrigaline - we have to get a senior cabinet voice who is going to shout for this type of high level investment in LImerick, which despite being Ireland’s third biggest city, is too often the cinderella of Irish regional cities. I call it the Limerick Junction syndrome - too often, we are told to forget about connecting Limerick to other cities by rail or road. It’s a scandal that there is no direct motorway or rail connection between Limerick and Cork, Ireland’s second and third cities.

In voting for a Directly Elected Mayor, the people recognised that we have to take control of our own destiny as a city, and not rely on Dublin-centric governments. It’s time to build a Limerick to live in, a Limerick that works for everyone.

Elderly Care That Works for you Policing that works for you Childcare that works for you Housing that works for you 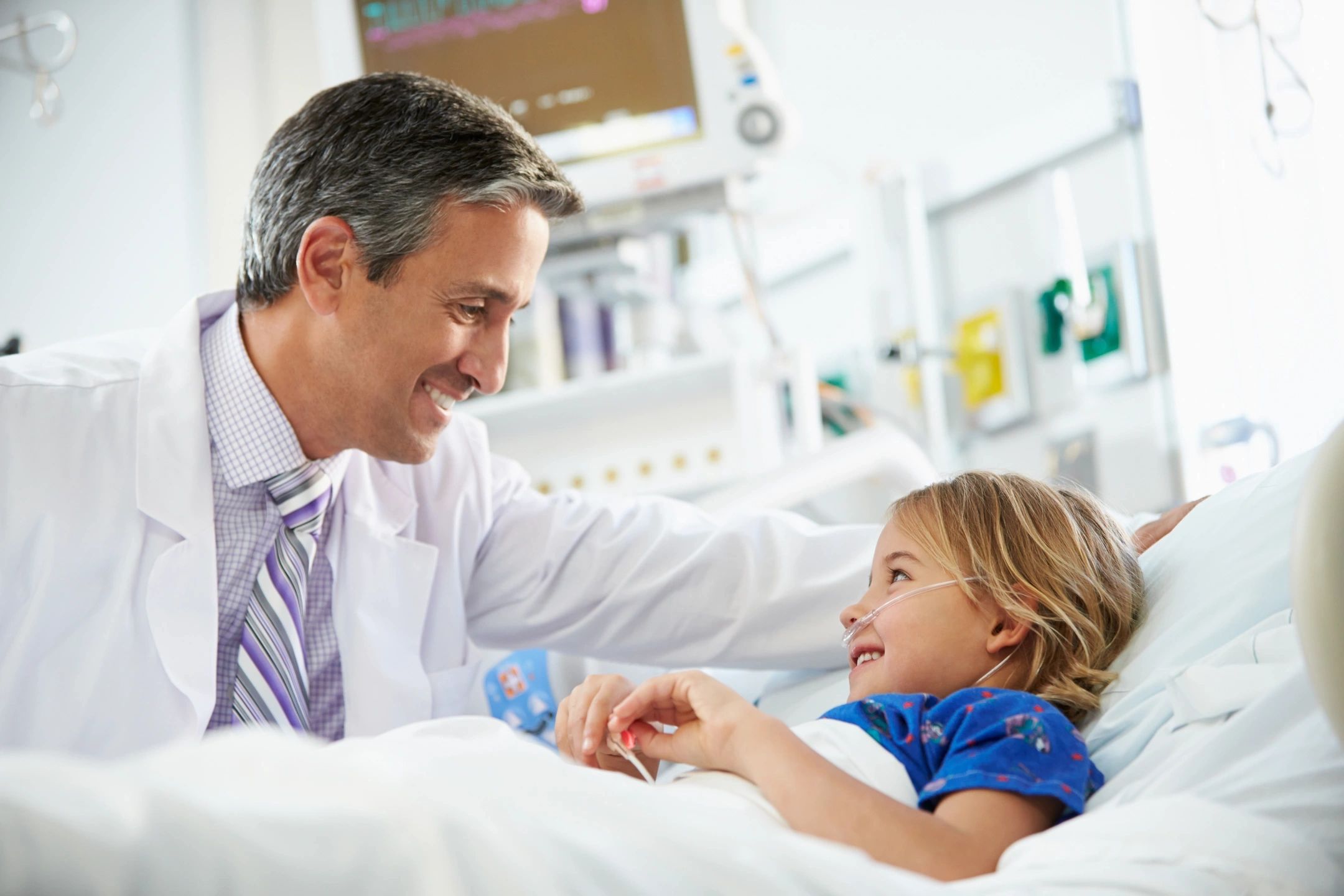 71,000 patients will attend the Emergency Department at UHL this year, up 6,000 on last year. If more of these patients were treated by their GP instead of in the ED, you would have less waiting times. But the government contract for GPs was downgraded. It needs to be improved to stop GPs emigrating, particularly from rural areas where the shortage of GPs is causing huge difficulties. A better GP contract means more GPs and less people in ED.

4,729 people are waiting more than 18 months for an appointment. The primary care units previously promised to alleviate overcrowded EDs, and cut waiting lists, have not been delivered. This has to be a priority.

880 patients on trolleys in June at University Hospital Limerick, the worst in the country. People end up on trolleys when they are admitted but there’s no bed. We have been promised a new 96-bed unit at UHL but as of now we need 300 new beds to meet current demand, especially if our population grows by 50% as is planned under the National Planning Framework. Also, there is still no funding indicated for Croom Hospital.

We need more beds, both public and private. More beds in private hospitals will free up beds in public hospitals. A private hospital planned for the Dock Road is on hold as a private health insurance company refused to back it.

The Council can’t keep up. Even if no-one joined the list between now and 2021, and even if the council met its three-year targets, there would still be 1,700 people waiting for a house.

For first time buyers, the picture isn’t any better. They need a salary of €45,000 to buy an “affordable home”.

We need to do two things urgently:

1/increase the supply of land. Free up State-owned land for properly planned housing and discourage hoarding by developers or vulture funds.

2/ open up to new ideas: I recently met with the Limerick owners of Clenn Construction who have returned from the United States to manufacture A-rated RAPID PRECISION ENGINEERED MODULAR HOMES. They are employing local tradespeople in Galvone, Limerick. Their show house was built in two weeks. When the old ways aren’t working, you need to try something new. 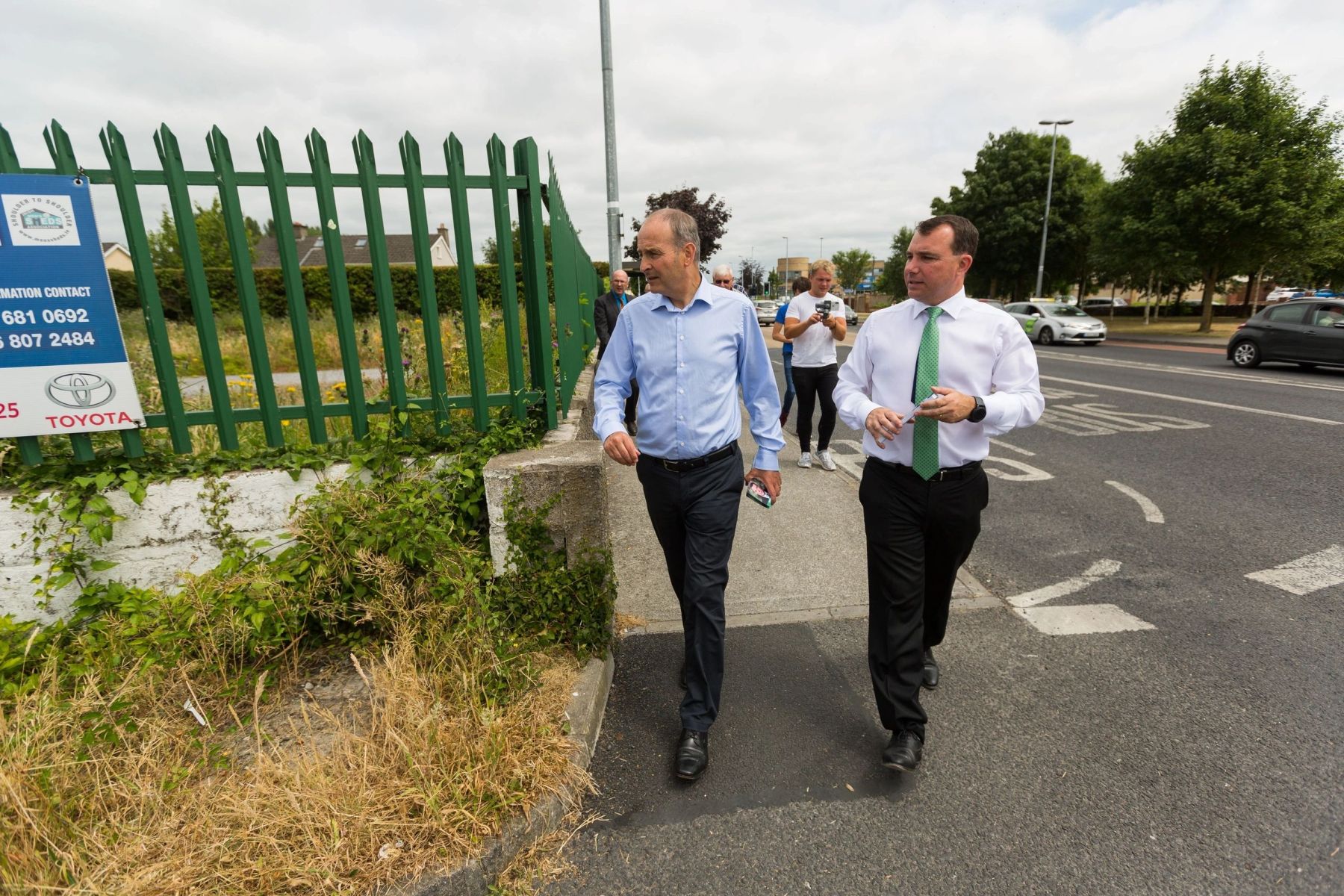