A LIMERICK THAT WORKS FOR YOU 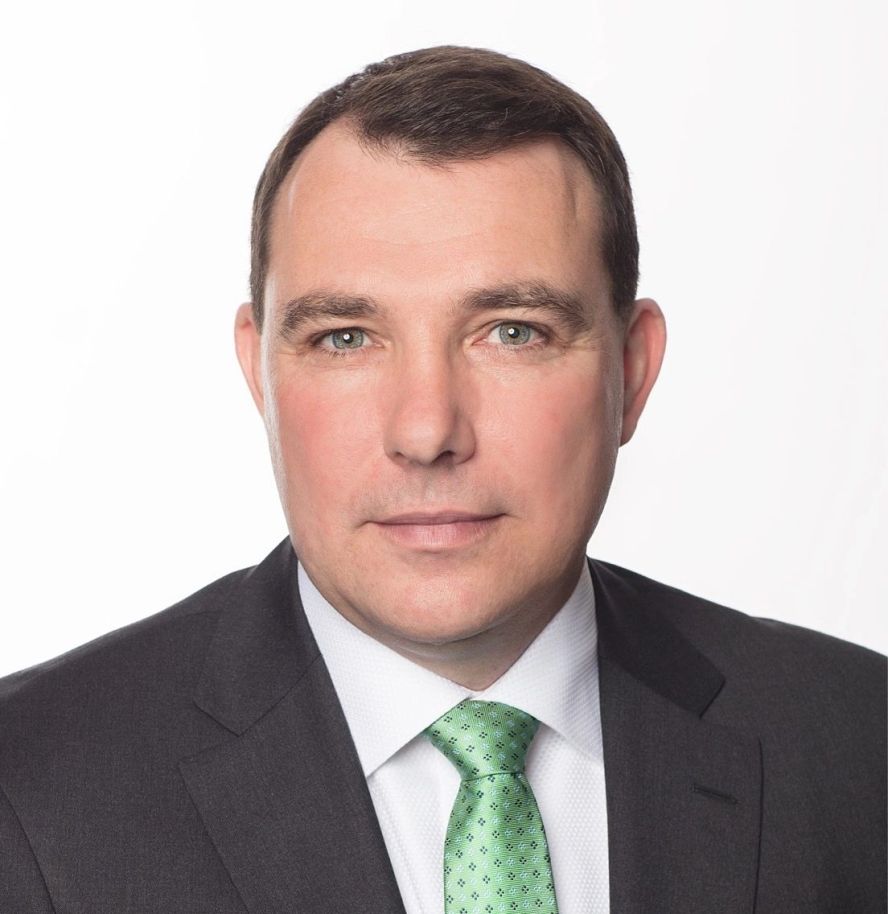 CLLR JAMES COLLINS - A LIMERICK THAT WORKS FOR YOU

VOTE NO. 1 for a Limerick That Works For You

The Environment, Public Transport, and my 'Green' policies.

ELDERLY CARE THAT WORKS FOR YOU

POLICING THAT WORKS FOR YOU

CHILDCARE THAT WORKS FOR YOU

HOUSING THAT WORKS FOR YOU

My Limerick - A LIMERICK THAT WORKS FOR YOU

GREAT TO SEE SO MANY PEOPLE BRAVE THE RAIN AND MARCH FOR OUR LIVES LAST SATURDAY. STOP IRISH CEMENT. 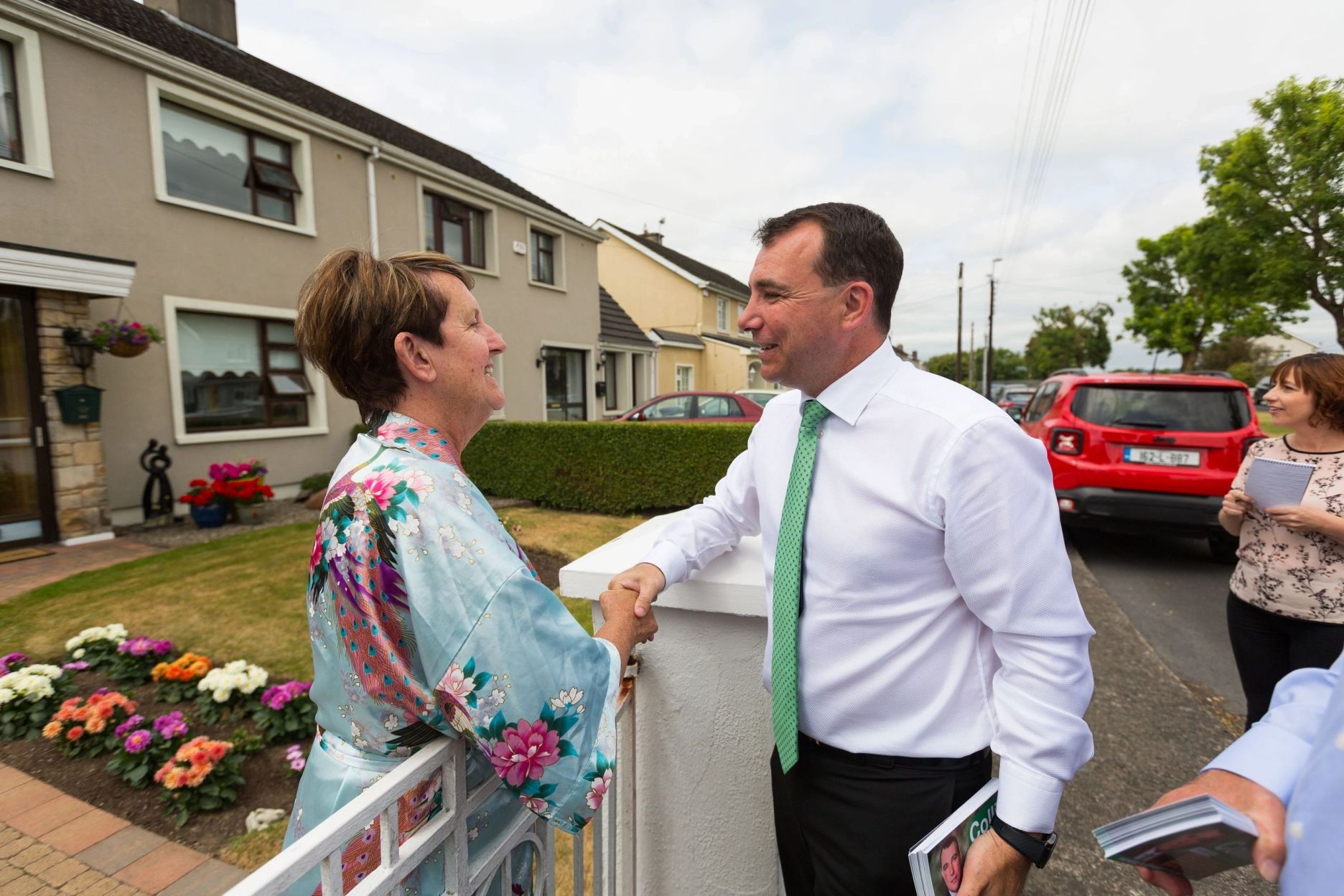 As a local representative on Limerick City & County Council since 2009, creating jobs has always been my number one priority. I’m a director of Limerick 2030 which aims to create a total of 12,000 jobs in the Limerick region, with 5,000 in the city centre. A vibrant city will result in a thriving community. Scroll down for my policies on jobs, housing, health, crime and incineration. You can read my newsletter and some helpful guides to changes taking place in Limerick by clicking the Download button

A NEW VOICE FOR THE NEXT DÁIL

For me, politics should be about helping people access jobs, education, healthcare and good public services, especially user-friendly transport. Life is a balance of work and play, friends and family. Politics should reflect that. People are sceptical about politicians and that's understandable, but politics can change how we live in Limerick for the better. I grew up in Dooradoyle in a family steeped in public service. My father Michael owned the Railway Hotel before he became a TD for Limerick in 1997. My uncle, Gerard Collins, is a former Minister for Foreign Affairs and Minister for Justice, and my cousin, Niall Collins, is a Fianna Fáil TD representing West Limerick. After studying business in UL and completing a Masters at UCD, I worked abroad as a management consultant for five years. I returned to Limerick with my wife, Eileen O’Dea, in 2000 and we subsequently opened Collins Bar in Dooradoyle, creating 30 jobs.We have four children: Eoghan, 16, Thomas, 14, Daniel, 11, an Beibhinn, 8.

I have been an elected member of Limerick City and County Council since 2009.

I am a board member of Limerick 2030. Our job is to revitalise Limerick, by acquiring and developing strategic sites to attract new employers. One site, the Gardens International office complex, is scheduled for completion this year. We plan to create space for up to 700 jobs there. Next up is the Opera Centre - a full city block development of office, residential, retail and cultural buildings. The aim here is to bring life back to the city centre. We are also master planning for Cleeves and a new housing development at Mungret.

I’m also on the board of Innovate Limerick, which brought Troy Studios to Castletroy. We also created ENGINE, a digital media hub in the city centre, training local people for media jobs. People now think of Limerick as a clean city for high-end jobs in finance and technology. Having a vision and planning for the future - these are central to delivering on jobs, housing, health, and crime prevention: the four pillars of my work for the people of Limerick. 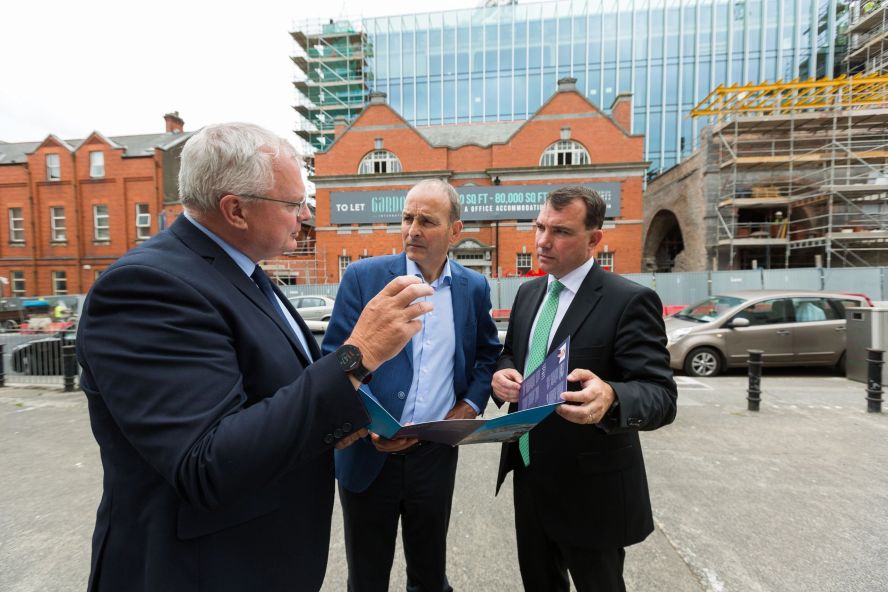 A LIMERICK THAT WORKS FOR YOU

Five years ago, plans were put in place to create a Limerick that works for multinationals, for FinTech, for Pharma, for Netflix, for Stats. I think we should now devote as much time and attention to the issue of how we live in this beautiful riverside city as we have previously invested in planning for jobs growth.

What we need to do now is to ensure that in every area – employment, education, housing, transport, health and crime prevention - that we are planning ahead for Limerick.  There are plenty of challenges but we must get busy planning a Limerick that works for all of us.

A big part of that plan has to be about how we live outside of work.

We have to do more for the citizens of Limerick, make our parks and plazas more attractive and safer places.

I want as Mayor to promote the quality of life you can enjoy in Limerick - especially after work. We must protect our environment and our reputation.  That is why I intend to use the office of Mayor as much as I can to press the case against Incineration at the Irish Cement Plant in Mungret. There is a dark cloud hanging over us. I will be urging the EPA to reject Irish Cement’s licence application to incinerate toxic waste in the suburbs of Limerick at Mungret.

Mungret is the perfect example of what can be achieved with long-term planning. We have built new schools and new roads,  provided a beautiful public park, extended local sports facilities and added new ones. We are planning family homes, which are surrounded by services, and designed to reflect the way we will live in the near future.

Mungret started with a big idea. Careful planning is helping to deliver it. We need to imagine the next big ideas, so we can help deliver a Limerick that works for you.

Helping to create jobs in Limerick

With Fianna Fáil leader Micheál Martin outside the Gardens International building in Limerick City, where we hope to welcome 700 new workers.

ARE YOU REGISTERED TO VOTE? 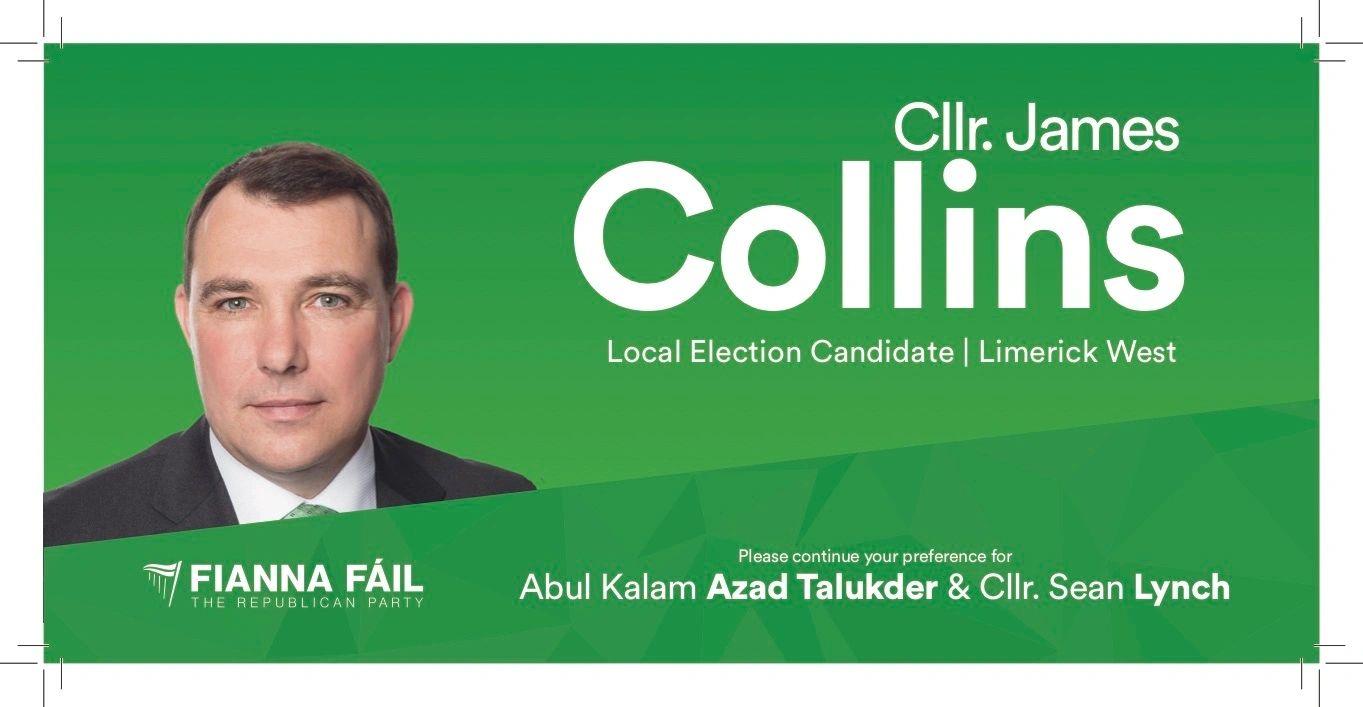 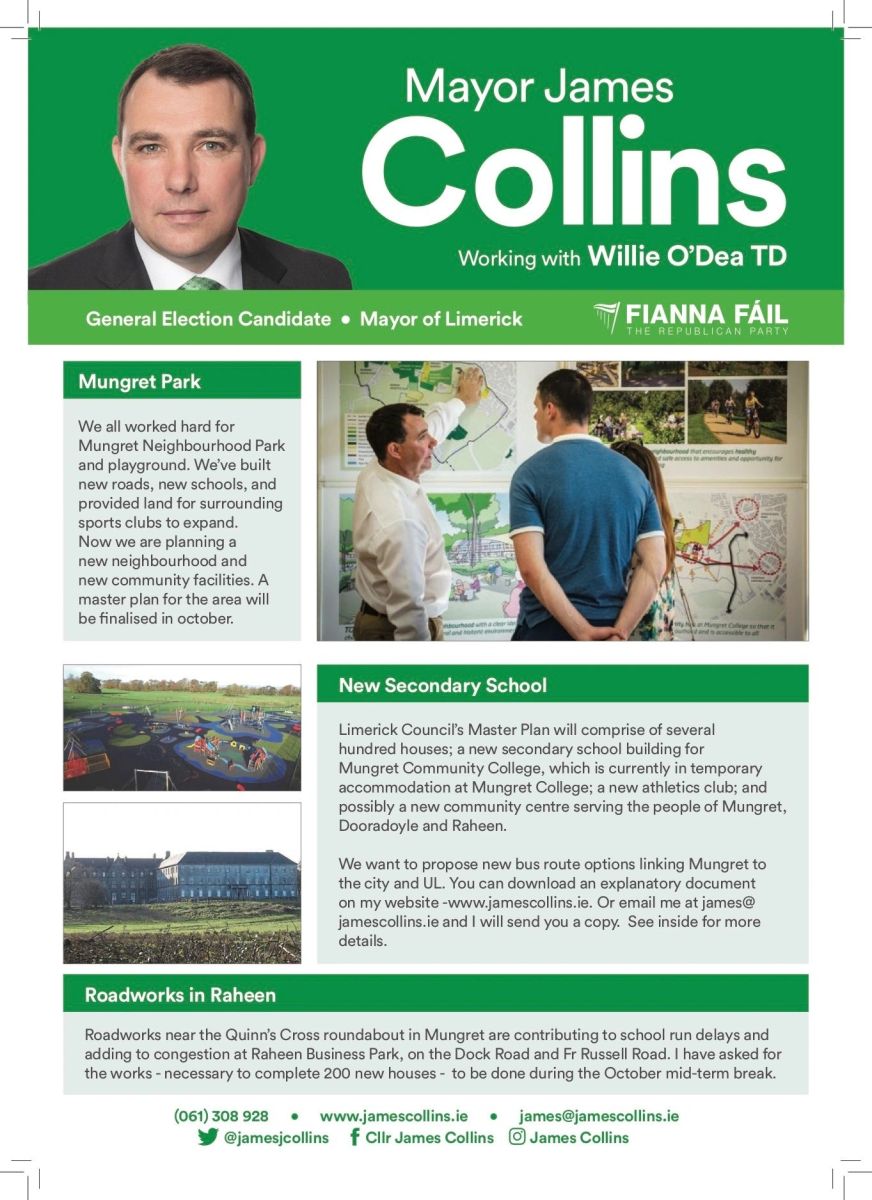 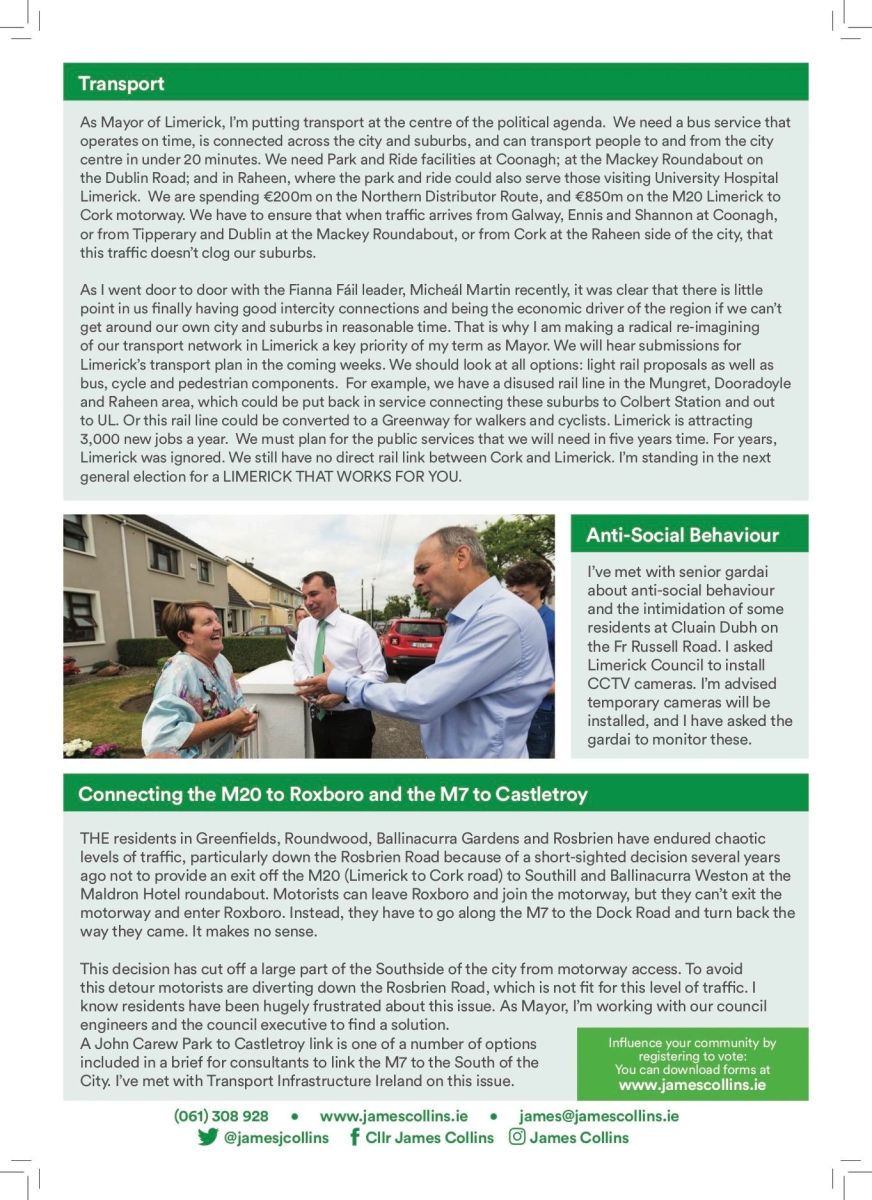 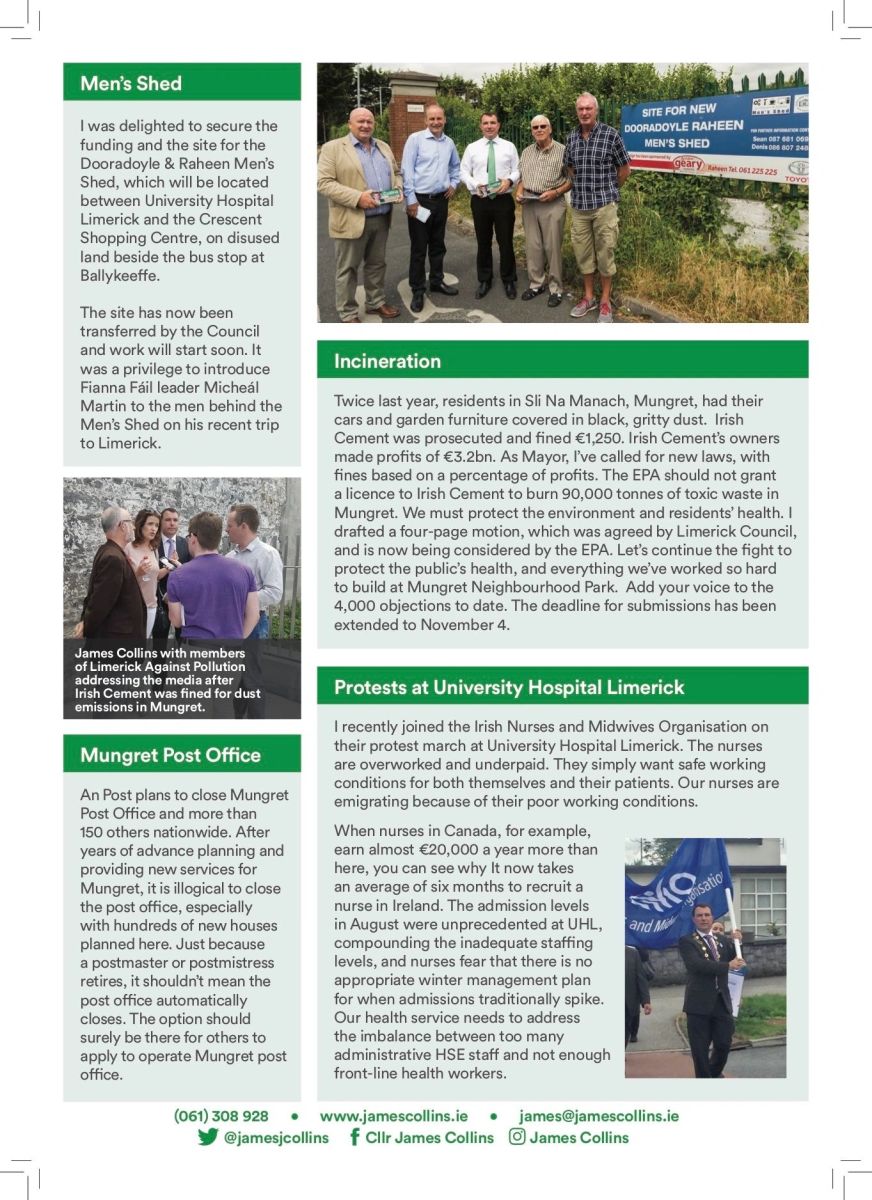 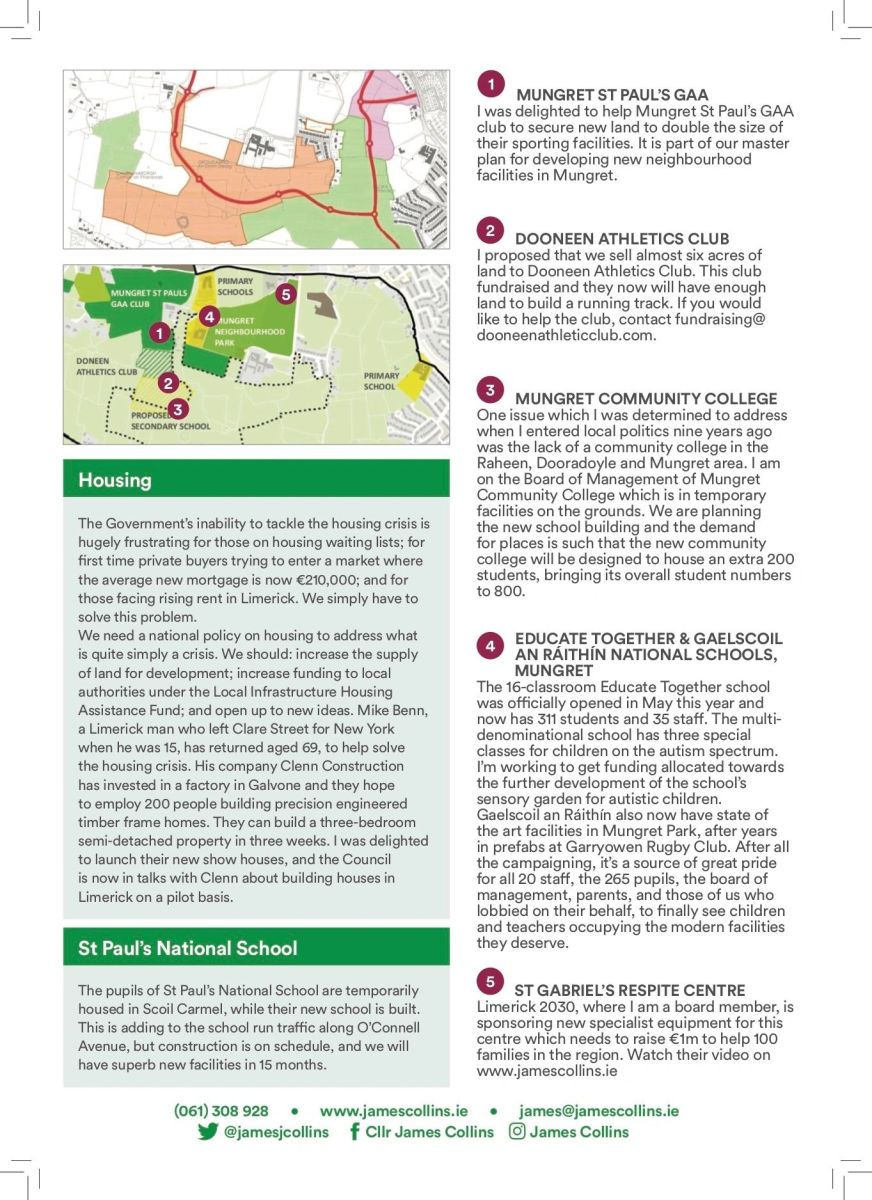 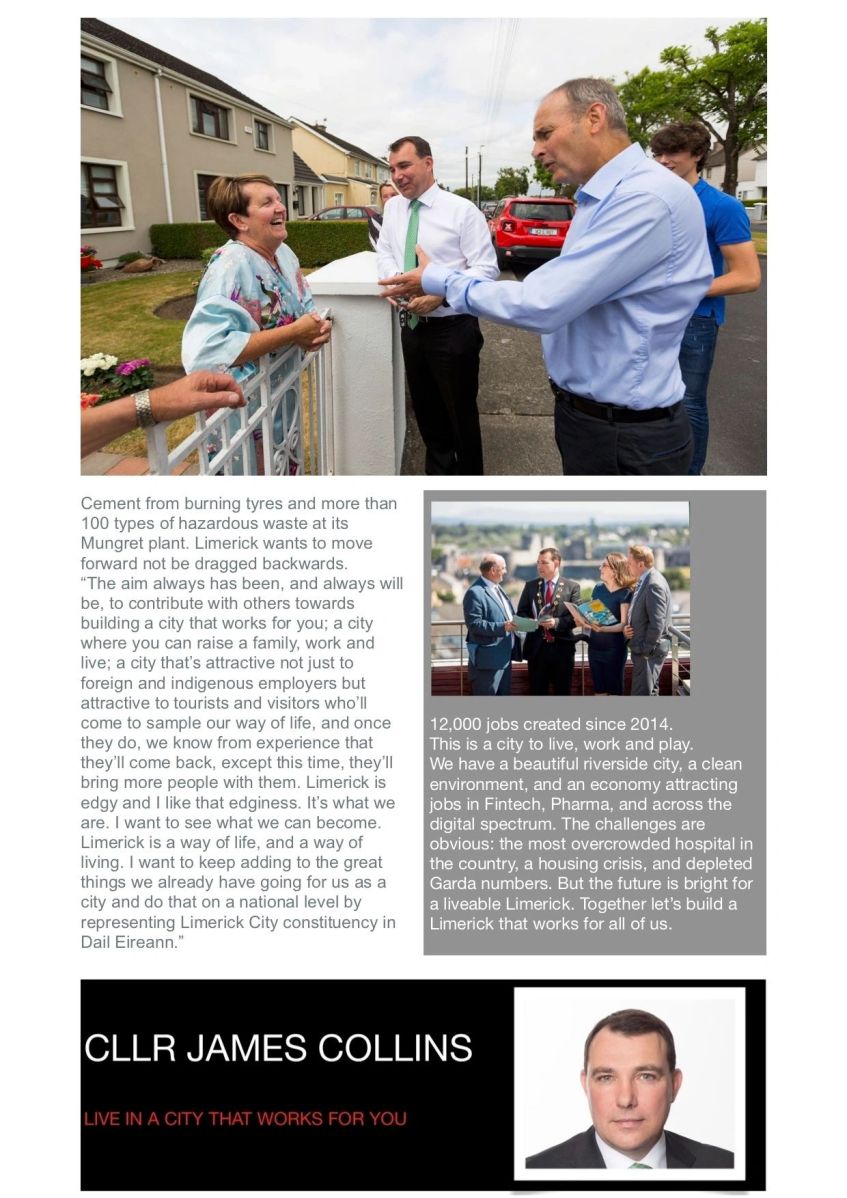 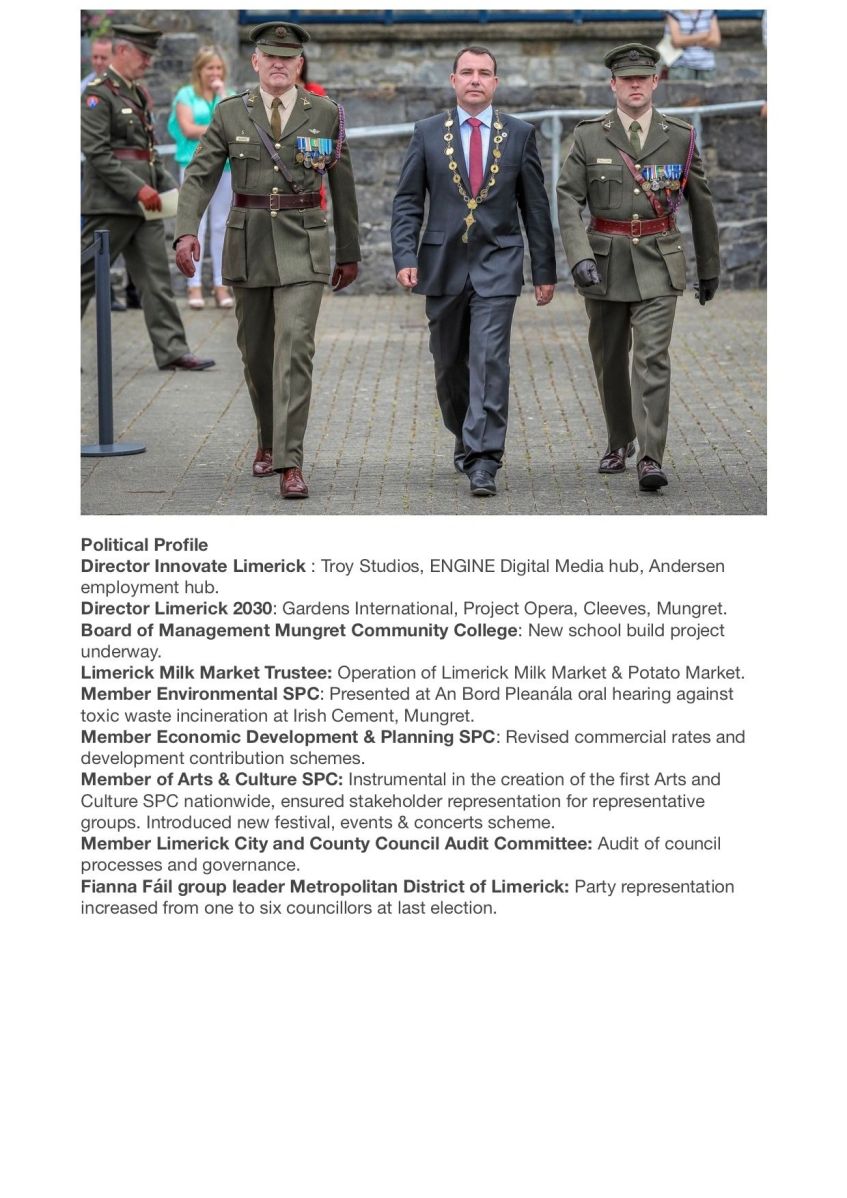 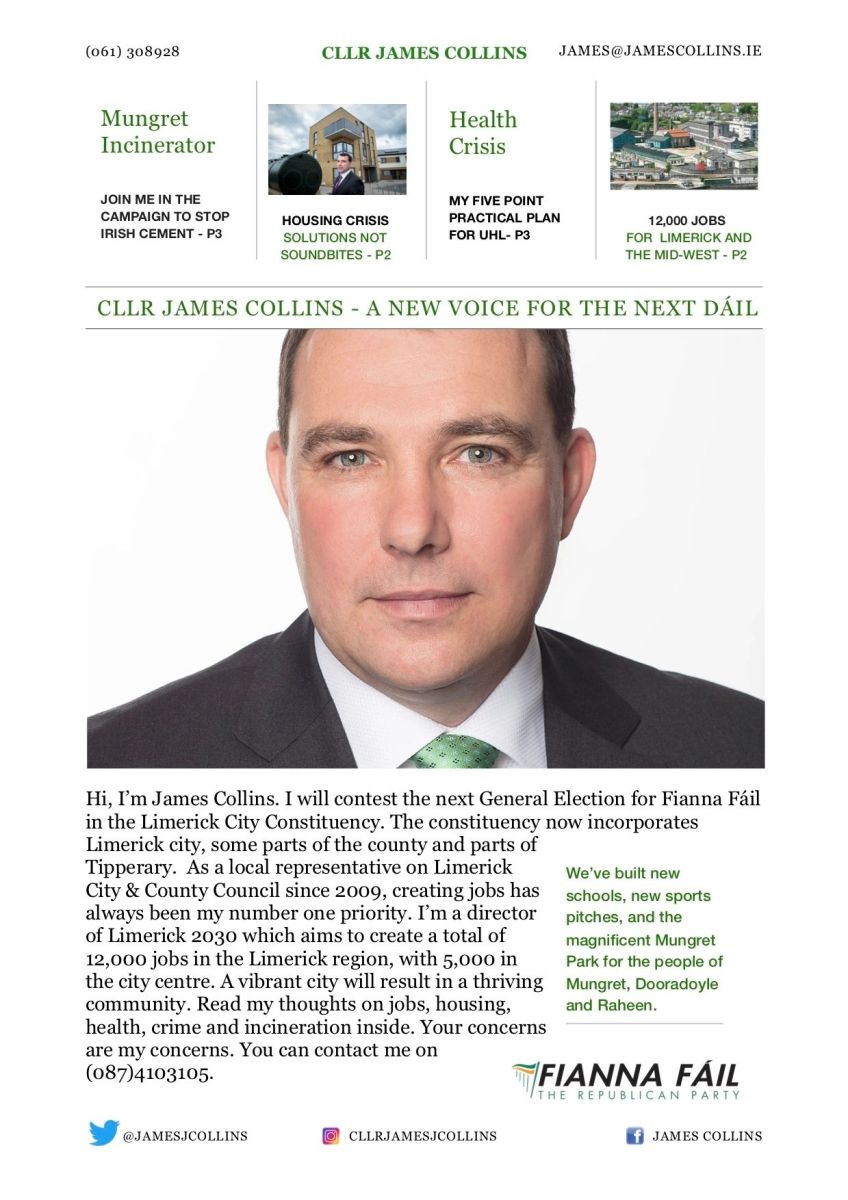 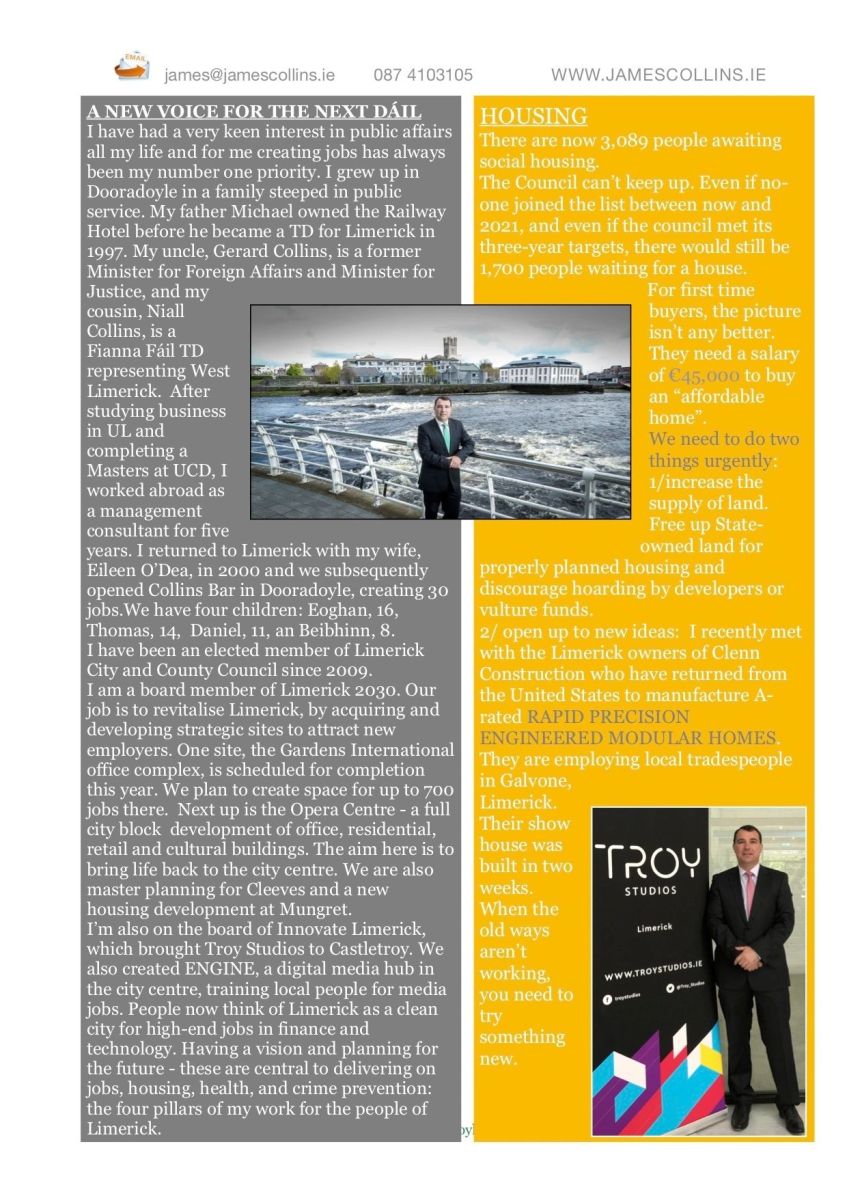 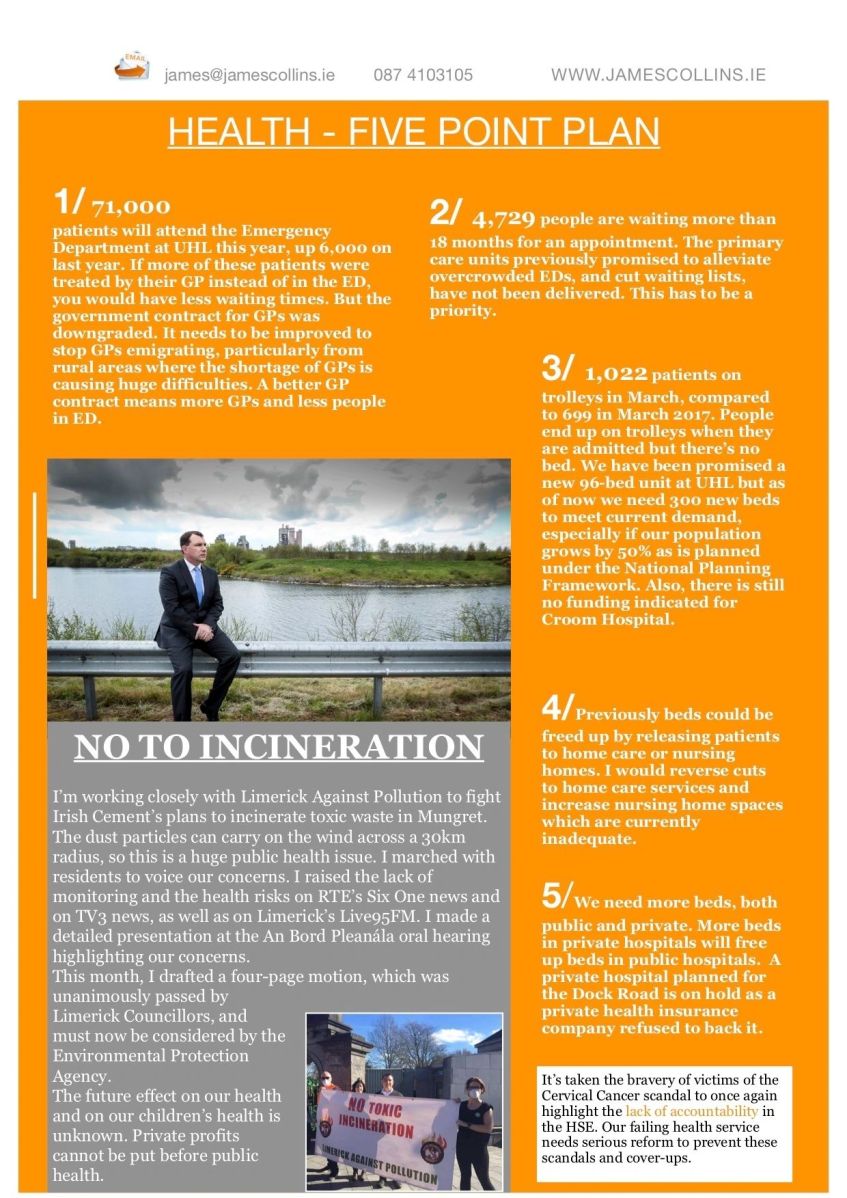 There are some very important proposals included in the 145-page Climate Action Plan. The language used is very aspirational and many of the proposals are not costed. However, we all agree that we have to act on climate change, so to be informed of what exactly is being proposed, please feel free to download the full report below.

So proud of our senior and minor hurlers - Munster Champions

The crowd scenes here show what it means to all of us in Limerick.